Recent Genshin Impact leaks claim that the upcoming Version 3.0 will apparently have a shorter duration than the usual update.

Genshin Impact has a very tight update schedule with each new version of the game lasting approximately six weeks. Developer HoYoverse has already confirmed that the upcoming update 3.0 will introduce the fourth major region to the game, named Sumeru.

However, it seems as though the first Sumeru update will apparently be a lot different from usual updates. Over the last couple of weeks, numerous leaks have been hinting that Genshin Impact Version 3.0 might have a shorter duration.

One of the most credible leakers, Plusleleaks, has revealed that Genshin Impact update 3.0 will probably be one week shorter than expected. The game has been confirmed to appear on this year’s Tokyo Game Show, which will be held from 15-18 August. In order for Genshin Impact to participate in TGS, the live stream event for Version 3.1 must be placed within these dates. This would mean update 3.1 should arrive on September 28 which would is one week before the game’s usual update schedule. Click here to see the full Reddit thread. 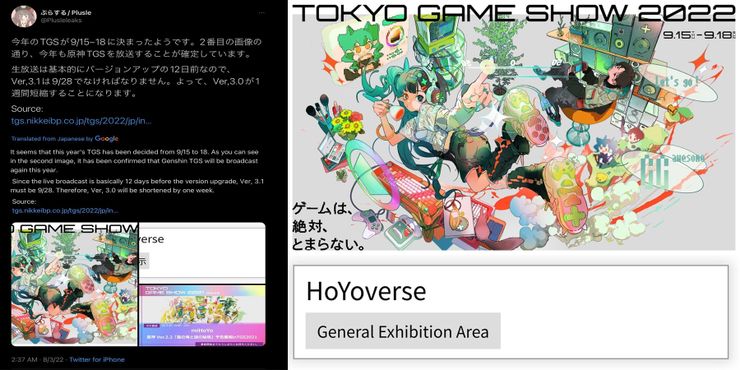 This information has been somewhat confirmed by another popular leaker, Project Celestia, who claims that the Battle Pass for Version 3.0 is apparently one week shorter. This could be HoYoverse’s way of compensating for the three-week delay that happened during Genshin Impact update 2.6 due to the complicated COVID-19 situation in Shanghai.

Apparently, this won’t be the only change to Genshin Impact‘s usual banner schedule as recent leaks claimed that update 3.0 will apparently have three separate limited banners. The game has already announced three new characters for the first Sumeru update and there is a chance that they could be divided between the three banners. However, considering that only Tighnari is a five-star character means that there will be two banner re-runs in 3.0.

Tighnari will apparently be a new Dendro bow with strong DPS capabilities. Even though he is confirmed to be the first five-star Dendro character, a big part of the community claims that they will skip his banner since recent leaks confirmed that he will join the Standard Banner after 3.0. According to numerous leaks, these re-runs will include two very popular characters, Zhongli and Ganyu. They’ve already appeared together on a double banner during the second part of Genshin Impact update 2.4.

Genshin Impact is available now on Mobile, PC, PS4, and PS5. A Switch version is in development.